During the great Bantu migrations into southern Africa, one group, the Nguni, moved down the east coast. A clan settled near what is now Maputo in Mozambique, and a dynasty was founded by the Dlamini family. In the mid-18th century, increasing pressure from other Nguni clans forced King Ngwane III to lead his people south to lands by the Pongola River, in what is now southern Eswatini. Today, Swazis consider Ngwane III to have been the first king of Eswatini.

The next king, Sobhuza I, withdrew under pressure from the Zulus to the Ezulwini Valley, which today remains the centre of Swazi royalty and ritual. When King Sobhuza I died in 1839, Eswatini was twice its present size. Trouble with the Zulu continued, although the next king, Mswazi (or Mswati), managed to unify the whole kingdom. By the time he died in 1868, the Swazi nation was secure. Mswazi’s subjects called themselves people of Mswazi, or Swazis, and the name stuck.

The Pretoria Convention of 1881 guaranteed Eswatini’s ‘independence’ but also defined its borders, and Eswatini lost large chunks of territory. ‘Independence’ in fact meant that both the British and the Boers had responsibility for administering their various interests in Eswatini, and the result was chaos. The Boer administration collapsed with the 1899–1902 Anglo-Boer War, and afterwards the British took control of Eswatini as a protectorate.

In 1960 King Sobhuza II proposed the creation of a legislative council, composed of elected Europeans, and a national council formed in accordance with Swazi culture. The Mbokodvo (Grindstone) National Movement, which was formed at this time, pledged to maintain traditional Swazi culture but also to eschew racial discrimination. When the British finally agreed to elections in 1964, Mbokodvo won a majority and, at the next elections in 1967, won all the seats. Eswatini became independent on 6 September 1968.
The country’s constitution was largely the work of the British. In 1973 King Sobhuza ll suspended it on the grounds that it did not accord with Swazi culture. He also dissolved all political parties. Four years later the parliament reconvened under a new constitution that vested all power in the king. Sobhuza II, at that time the world’s longest-reigning monarch, died in 1982. In keeping with Swazi tradition, a strictly enforced 75-day period of mourning was announced by Dzeliwe (Great She-Elephant), the most senior of his hundred wives. Only commerce essential to the life of the nation was allowed.
Choosing a successor wasn’t easy – Sobhuza had fathered more than 600 children, thereby creating hundreds of potential kings. Prince Makhosetive, born in 1968, was finally chosen and crowned King Mswati III in 1986. 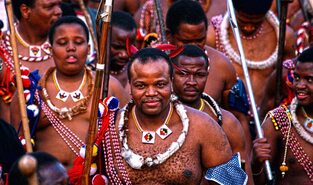 The king continues to represent and maintain the traditional way of life and to assert his pre-eminence, as absolute monarch. Following his predecessor’s style, Mswati dissolved parliament in 1992 and Eswatini was again governed by a traditional tribal assembly, the Liqoqo. Although the King signed a new constitution in 2005, the document essentially maintains the status quo, with opposition parties remaining banned. Despite the increasing agitation for faster change, many reformers propose a constitutional king in a democratic system of government.

There are 2 governing structures that work alongside each other – traditional and formal government. The country is divided into 4 administrative regions (Hhohho, Lubombo, Manzini and Shiselweni), 55 constituencies (Tinkhundla) and 360 Chiefdoms. In the formal system, members of parliament (MP’s) are voted in by their communities, as are Bucophos (Development Officers).

Traditional Government has an independent structure consisting of a Chief, Headman, Elders, Community Police, Rural Health Motivator and Lihlombe Lekukhalela (Shoulder to cry on). The Chiefs are chosen by the king and generally have a familial line tradition.The impact of HIV has seen a reduction in the middle-aged bracket, thus reducing supports available to the ever-increasing number of orphans.

Eswatini is a small, predominantly rural, landlocked country surrounded by South Africa and Mozambique with a population of ~1,467,000 people. It suffers from severe poverty and has the world’s highest HIV/AIDS prevalence, with 27.4% of the population (aged between 15-49) infected (2017). Women carry the burden with 35.1% (b/n 15-49) infected compared to 19.3% of men.

Life expectancy has improved over the past 20 years and currently sits at 52.1 years. A staggering 1/3 of children are orphans (~100,000 children), therefore increasing the percentage of child-headed households.

Christianity is the predominant religion, with 90% of Swazi people aligning to the Christian faith. 40% of Christians identify as Zionists (a blend of Christianity and indigenous ancestral worship), 20% as Roman Catholic and 30% from all other Christian denominations. Polygamy is common practice within Eswatini.

Eswatini experiences a weak and declining economy, high unemployment, uneven distribution of resources and rapid population growth; all contributing to persistent poverty and food insecurity particularly in rural regions. The poverty ratio currently sits at 69% with many unable to meet basic food, education, transport and medical needs. Of these 69%, 43% continue to live in extreme poverty.

Unemployment rate is at an estimated 28% (2017). The major foreign exchange earners are sugar production and soft drink concentrate. Some small-scale mining operations have existed but these are declining. Otherwise the government is dependent on customs duties from the South African Customs Union for almost half of its revenue.
Powered by